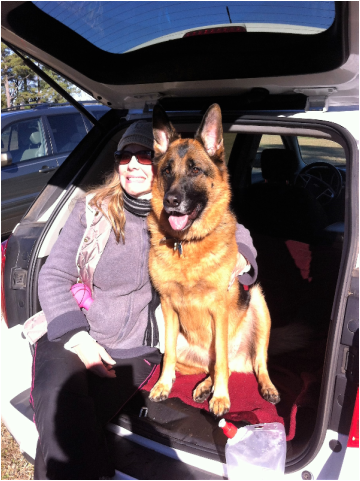 SPLENIC TUMORS AND HOW SERIOUS THEY CAN BE!
I am posting this for a new friend that I did a reading for because her Shepherd, Zarah passed away at 7 1/2 from a Splenic Tumor.  I also lost my Griffy from the same Tumor.  Please pass this around to inform others as to what to do if you have larger dogs.

Here are some thoughts/information regarding splenic tumors for your website/blog.  Please feel free to copy and paste what you feel is best/might be helpful.  And thank you for taking up the flag to start this dialogue:

We lost our beloved German Shepherd this past September.  We purchased her nearly 8 years ago as a puppy from a very reputable top breeder of quality show German and American German Shepherd dogs and we did so to ensure as best we could quality and a good, even temperament.  She was, from the first, to be "just" a family companion animal--not a dog to show or breed.

During her short life, we never spared any expense nor missed annual or necessary vet appointments, bordetalla shots or immunizations.  She was given monthly flea and tick as well as heart worm preventative products, ate expensive food and had opportunity for plenty of fresh water and exercise.  ANd she was spoiled rotten.  Yet none of that mattered.  "Zarah" died from a "silent killer" known as a splenic tumor.  The day she died we had absolutely no understanding of how critical she was nor, sadly, did our vet or three certified tech vets.  Not for one second did we think she would not be coming home with us when we first arrived at the vet office on that fateful day.  Zarah died in the car with us (just 30 minutes away from the emergency vet hospital) on our way to have further confirmatory tests done (i.e. an abdominal ultrasound) and possible surgery.

During the six weeks since her death, I have read quite a bit on splenic tumors and what I have read is simply shocking.  This disease seems to have a very high probability of occurring in certain large dog breeds such as Golden Retrievers (1 in 5), German Shepherds, Great Danes, etc., and the number of deaths related to kidney and liver tumors/cancers seem to be incredibly high yet nobody seems to be either tracking these numbers, researching the "whys" or more importantly, engaged in needed dialogue with such breed owners as to the signs and symptoms (though they are slight and few) as well as some of the proactive measures that these dog owners can do starting at about age 5 to try to catch this disease early. Splenic tumors can be either benign or cancerous(hemangiosarcoma) and if found to be cancerous, the prognosis/outcome is often very poor--no more than a couple of months survival even if the cancerous tumor/spleen is removed followed by chemotherapy.

We have lived in three different states and have seen at least 5-6 different vets during Zarah's lifetime.  Not once did any one of those vets mention to us about the high incidence of kidney/spleen tumors/cancers in German Shepherds. Had they or had brochures on the subject been in their offices, I can assure you that we would have been on the look out for any possible signs or symptoms and would have begun taking her to the vet office at least twice a year for a physical exam, routine blood work and an abdominal ultrasound beginning at age 5 just to make sure we tried to stay ahead of any such tumors developing.

Splenic tumors are called the "silent killer" for a reason.  Dogs often do not present obvious signs or symptoms. Most often even the most attentive dog owner will not be aware of changes in their dog until it is simply too late.  Often times, dog owners come home to find a deceased dog for no apparent reason and unless a necropsy is performed, this silent killer is not identified.

In our case, Zarah did give us some signs but sadly, we usually mistook them for something else.  In her case, she had a really bad habit of chasing and killing bumblebees over the years thus we attributed her bouts of lethargy to her being stung. However, looking back, the past 8-10 months of her life, there was, at times, sort of a noticeable slight change in her energy patterns (and this is an important symptom of the disease as it waxes and wanes). She would be very active then we'd notice she just seemed a bit more tired.  She would lie down a hair more quickly after chasing a ball.  But those times would be brief and a day or two later she'd be back to "her old self."  Yet in the back of my mind I kept thinking, "Hmmm, she just doesn't seem like she has a "normal" amount of energy for a dog that is just 7."  Yet she never liked the heat and the past summer of her life, we attributed her passing bouts of slight lethargy to bee stings and the high heat and humidity.  Looking back, there were also a few times she felt "hot" to me and I thought maybe she'd had a fever but again, she'd rebound quickly and those thoughts of mine would unfortunately pass.  About five days before died, she began to drink an excessive amount of water.  We had witnessed her being stung by a giant bumblebee the day before so we once again attributed this new symptom to the bee sting and figured as was typical--her system would reset within a few days.  In fact, I had made a vet appointment for her only to have her rebound with such an incredibly high energy and enthusiasm level the following day that we ended up cancelling that vet appointment.  She would be dead just two days later.  Always trust your instincts.  When in doubt, make an appointment.  Keep that appointment.

I also failed to keep a watchful eye on her ears and gums to make sure they stayed pink and healthy looking.  By the time we arrived at the vet office that day, they were both pale (indicative of anemia and as we now know--she was already probably bleeding into her abdomen).  Sadly, while we were able to get Zarah to the vet's office the day she died, and while she walked into the office under her own power, she immediately lied down.  Our vet and the vet techs failed to recognize that what was really happening was that the tumor had or was in the process or rupturing and that she was going into shock.  Zarah was never given any shock fluids.  In most likelihood, Zarah bled to death in our car on the way to have further testing.  It is only with Donna's help/reading that we have found any solace in Zarah's passing.  Donna told us that Zarah knew what was happening, didn't want any intervention and that it had, in fact, happened the way she wanted it to.  Nevertheless, if telling our story prevents just one family from having their own beloved dog die from this silent killer, it would bring joy to our hearts and wipe away a tear or two.

I am including three different hyperlinks regarding splenic tumors that I have found helpful and informative.  I highly encourage any dog owners whose breeds might be susceptible to this disease to spend the time on the internet researching and educating yourselves on the disease, its signs and symptoms and its possible causes.

From my own personal experience, I would also encourage people to select a vet who is knowledgeable about this disease, who perhaps takes a more holistic approach to prevention and treatments, whose office houses the abdominal ultrasound equipment, who will practice/provide emergency treatment even if their office is closing, and who is willing to engage in the important dialogue about this disease and partner with you in this fight.  If not, do yourselves and your dog a favor and find another vet.  And do not be polite.  You are your dog's only advocate.  Had I known then what I know now, they would have had to have called the sheriff's office to make us leave that day without them treating Zarah instead of just continuing to work through the 5-6 dogs left on their schedule the next 2.5 hours to then roll her into our car for another 1.5 hour drive to an emergency vet hospital.  Time matters.

As dog owners of certain breeds, it is up us to be informed and vigilant.