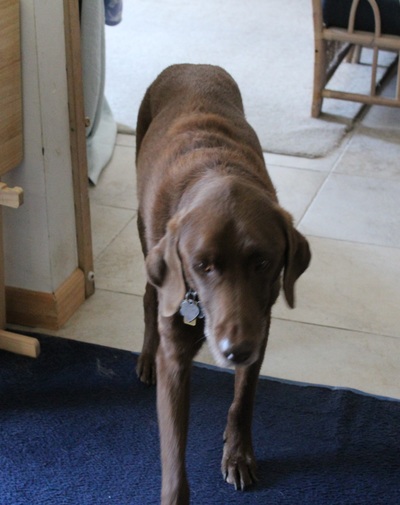 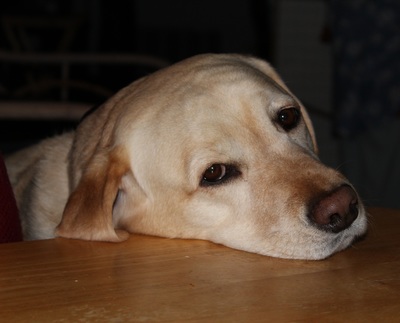 DAKOTA
Dear Donna,
Thank you so much for the amazing talk we had with Cody & Dakota.  We found the missing toy that Dakota described. It was between a wall and her toy box. It was a brown squirrel (long) Dakota could not get to it.
We both feel much better on how we are working with Cody and are seeing results. He is off all his medications, both regular and herbal. He is eating much better and taking bone broth and kefir plain yogurt. He is really happy and
so are we. We can’t wait for his 13th birthday on April 21st.
Thanks again...
Donna, Chris, Cody and Dakota Dumont 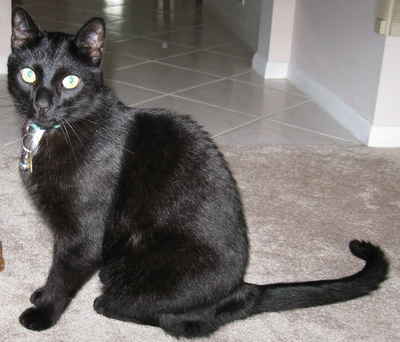 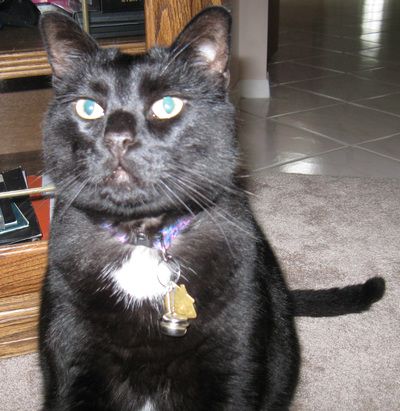 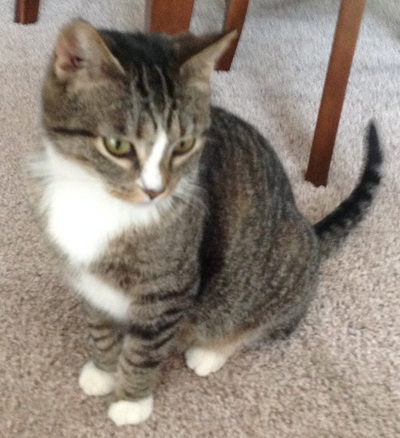 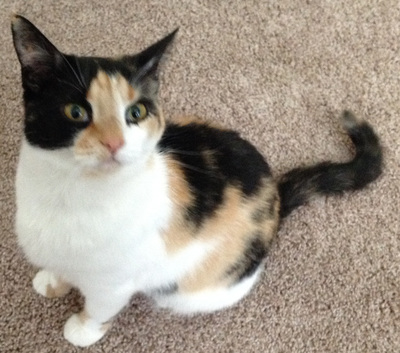 SOPHIA
I cannot thank Donna enough for all the help she has given me during the past year. I first contacted her when my dear cat, Bart, stopped eating and his vet could not identify the problem. After several tests and exploratory surgery, Bart was no better and I turned to Donna desperate to find out what was wrong. She contacted Bart and learned that he had a toothache that kept him from chewing.  She told me the tooth was in the upper right side of his mouth.  I took Bart back to the vet and asked for a second dental check.  Sure enough the vet found an abscess in the exact spot that Donna mentioned. After his dental treatment, Bart started eating as soon as we got home from the vet's office. Unfortunately, Bart died eight months later from congestive heart failure and a stroke. There are no words to describe my heartache.  Bart's litter mate, Millhouse, died from colon cancer just 15 months prior to Bart's death. It was unbelievable that I had lost both of then in so short a time.
I contacted Donna to let her know what happened and I requested her to contact Bart and Millhouse so I could be sure they were together and content.  The session we had was so comforting that I finally began to heal my grief. They were fine and they encouraged me to get another cat or two.  I sent Donna photos of all the cats that I saw as potential adoptees and she kindly communicated with my cats and got their opinions. That may sound very strange, but I got very good guidance and the two young females that I adopted have been a blessing.
Linda 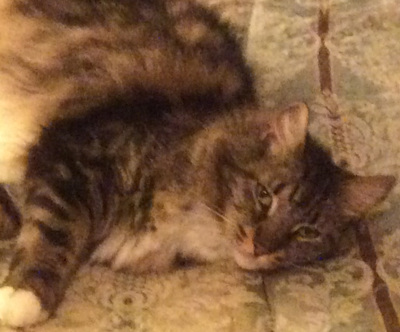 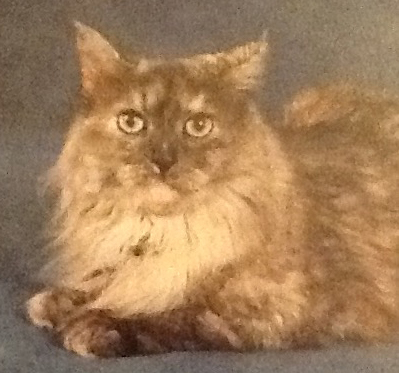 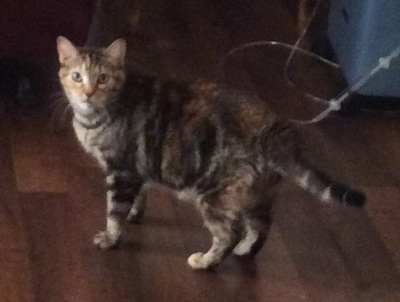 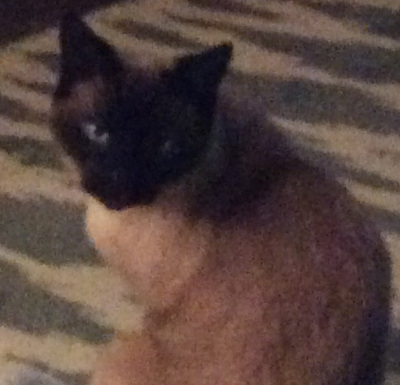 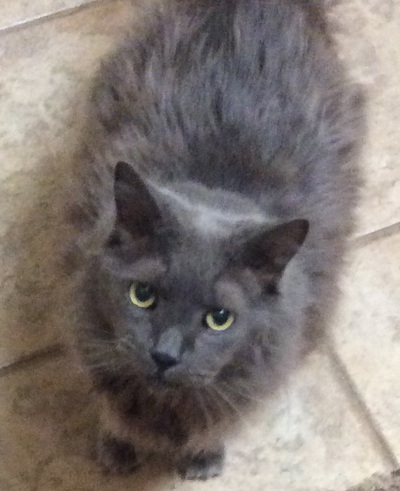 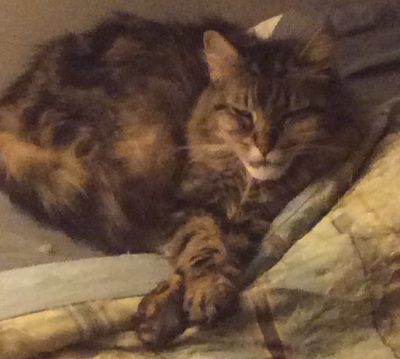 MeToo AKA STUBBS
I first met Donna after the passing of my Mischief, whom I was convinced the vet murdered my fur baby and later was a comeback kitty..  We cried together after meeting at the rainbow bridge when she lost her Kiesha.  After many tearful phone calls she decided to do animal communication.  Granted at first I was skeptical.  But at the time no one in this world knew what I called my girl friend.  But on May 21, 2005 I lost my soul, my best fur baby, my heart to elderly issues, my Kitty kay.   I was devastated due to I had her in my life for 22 human  years.
I called Donna and she did a reading for me because i needed to know how she was doing at the rainbow bridge.  I specifically asked Donna does kitty kay have anything to say to me.  Now keep in mind that NO ONE knew what I called her.  Donna told me ..."Kitty Kay says we will always be girlfriends".
It was at that time she validated:
Every night i would pick her up and say ok girl friend time for bed, or come on girl friend let's do this or that.  And off we would go.  Later on down the line I lost 2 other fur babies.  Donna told me that they had plotted to come back and they did as brother and sisters.  They came back as Bob, Me-too and KK.
Mischief came back as Little man, Kitty Kay came back as KK and Stubbs came back as Me Too.  Those were just a few of the ones she has validated .  The Aja's were come back kitties.  She continues to talk to Buddha, Smokey, Mischief, Kitty Kay and a few others that have crossed over.  At one time we lost our little Buddah.  Donna found her and was able to lead us to exactly where she was.
Do not have any doubts of her gift.  She is a true reader.
Donna
I have known Donna for many years now.  From our first session together she has shown an amazing talent and ability to reach our loved ones who have not only passed to the other side, but to also communicate with those that are still with us.  12 years ago I lost my beloved parrot Nelson.  He is the love of my life.  I say “is,” because through Donna I now know that our pets are still with us in spirit all the time.  They love to have us think of them and talk to them.  All this I learned through Donna and her great gift.  Donna has told me things about my life with Nelson that no one could ever have known without Nelson telling her.  After Nelson passed, I still had another parrot named Baby.  While Baby was still on this earth with me Donna was able to communicate with her and to tell me all that she was thinking and feeling.  In every way, she was spot on.
I hope that anyone who is hesitating about doing a reading to just take the plunge and go for it.  You could not be in better hands.  Not only is Donna talented but she is very compassionate and understanding.  Communicating with your loved one will truly heal your heart and soothe your spirit.
Thank you for everything, Donna!
DIANA 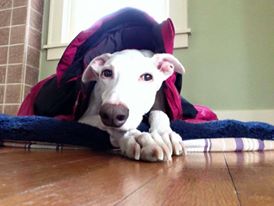 BUDDY
I called Donna in Summer 2015, after a well doggie check up with a new veterinarian.  My greyhound, Ferrari (Buddy), turned 12 a few months before.  He seemed to be losing a lot of weight, and I wondered if I was going to lose him.  A friend of mine had told me time and again that she would contact an animal communicator to see what her hound was thinking.  At first, I thought it was hokey, but I decided I didn’t have anything to lose, and Donna came highly recommended.
She only asked for a few pictures prior to talking to me on the phone.  I didn’t really give her any additional information about Buddy.  She told me that he enjoyed sleeping somewhere “green,” which happened to be the color of the sheets on my bed.  I worried about his health, but she told me that there was nothing wrong with him….maybe just some achy bones now and then, and that I should put a heating pad on him.
I think what really got me was when she told me what he thought of our family dynamic.  My husband and I had just bought a house and were building our new life.  She told me Buddy *LOVED* the new family, and was especially fond of my husband.  He was very skeptical of the stepson that lives with us, and “keeps an eye on him because he doesn’t trust him.”  (He still does this, and has even started barking at him for what seems like no reason…) Through Donna, Buddy told me that he did not remember his life in Spain (he is a Galgo, from the streets of Barcelona), and that he is exactly where he is supposed to be.  He said this many times during the conversation.  He told us that he was put here to teach me things that I will only realize after he is no longer here…..but he still had a lot of living to do.
Six months later, I contacted Donna for another reading.  This time, she told me that Buddy really liked the heating pad that I had been giving him, and that he was still very happy with our new family.  On this call, the thing that got me that Donna couldn’t have known (we live 300 miles apart!) was about my new pet sitter.  In January, I had to hire a new sitter for Buddy…..Donna described her to a “T,” and told me that Buddy REALLY liked her because she was grounded, patient, and spent a lot more time with him than my previous sitter.  Donna did a scan on his body through new pictures that I sent, and she told me had I not sent pictures, she would have figured him to be a totally different dog!  She told me he was happy and healthy.  Through Donna, Buddy told me how much he loved his Daddy….and then all of a sudden he said he missed his Daddy because he went away a lot.  My husband travels every other week….something I did not share with Donna until she mentioned this to me.
If you are considering using an animal communicator to find out what is going on with your pet, you should make an appointment with Donna.  It totally blows my mind how she is able to provide such comfort.  We will be following up again in a few months to see how Buddy is feeling and what he needs since turning 13.
Jo 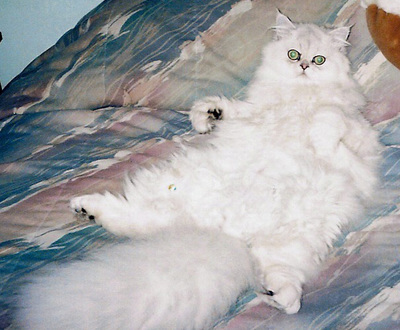 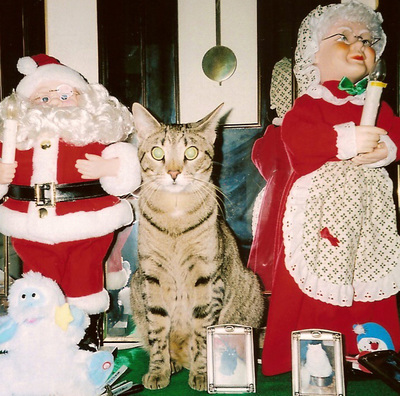 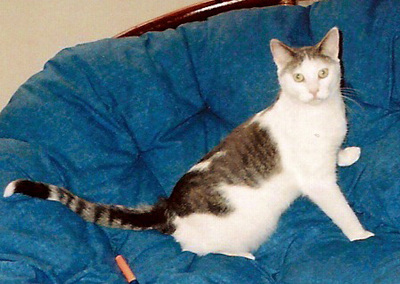 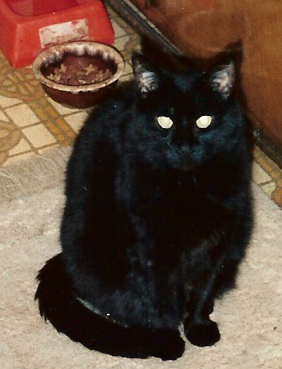 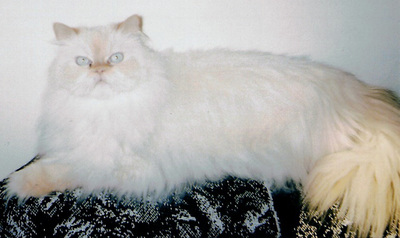 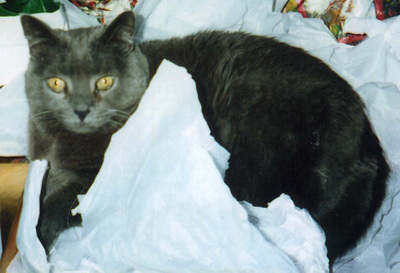 GREYSON
"I highly recommend Donna for your help in healing and communicating to our fur babies. I have used her different times when I was at my lowest point and not moving forward.  She was able to contact my boys and get some answers.  There was closure that I needed.  I had lots of guilt and her contacting my boys helped me.  She knew things that I didn’t tell her so that is why I knew she was talking with my babies.  If you want peace of mind and heart she will help by contacting your baby. Looking forward to when we will be together again. Thank you, Michele"